Dear all,
It is honored to be commissioned to hold a pop-up store in Takashimaya Department Store in Japan.
However it was one of small project, we have started it with hoping early reconstruction after the great earthquake in the Tohoku. A number of popular traditional Kokeshi that have loved by the people overseas will be introduced in this pop-up store. We are looking forward to you coming with your friends or family to our pop-up store. 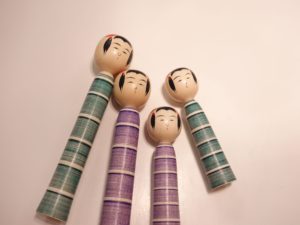 We have collaborated with international exhibitions, international museums and boutiques in Paris, San Francisco, New York and around the world to deliver traditional kokeshi dolls which have been created in the north east area Tohoku in Japan and are very attractive to many people all over the world.

Traditional kokeshi has been handmade one by one all the way since the Edo period in the Tohoku and they have fascinated European and American designers, architects and journalists, not to mention of Japanese culture enthusiasts around the world.
More than 1500 dolls which have created by active artisans have crossed the ocean through this project.

Traditional kokeshi is something that has been created by the discipline of technology.
We have got accustomed to its presence, it has become ordinary and it has become a culture.
However, we usually do not so much been aware of various elements on traditional kokeshi culture.
We have forgotten them and we may not have to recall rarely.
The unconscious is what might be a thing called culture.
It has been lost in everyday life.

This activity might have be an attempt to re-discover the space-time esthetic sense through dialogue with people who have got to know traditional kokeshi for the first time around the world.